Replace the turkey with a historic South Louisiana tradition that brings the whole community to the table. As a state known for food, history and French influence, a Louisiana Thanksgiving is nothing short of interesting. Rooted deeply within the Cajun and Creole cultures, many Louisianans did not celebrate with a turkey until recent years, preferring pork that had been killed at fall boucheries. In the past and present, Thanksgiving boucheries around Acadiana bring friends together for the day to butcher and prepare an entire pig.
Delicacies such as boudin (meat and rice stuffed in a sausage casing), cracklins (fried pork fat) and hogs head cheese (a terrine made from the head of the pig) result as byproducts of the boucherie, replacing the usual staples of turkey, dressing and sweet potato casserole. While the pig feast is a culinary feat to write home about — if you can secure a coveted invitation to one — the focus is on tradition, family and respect for where our food comes from, especially around Thanksgiving. 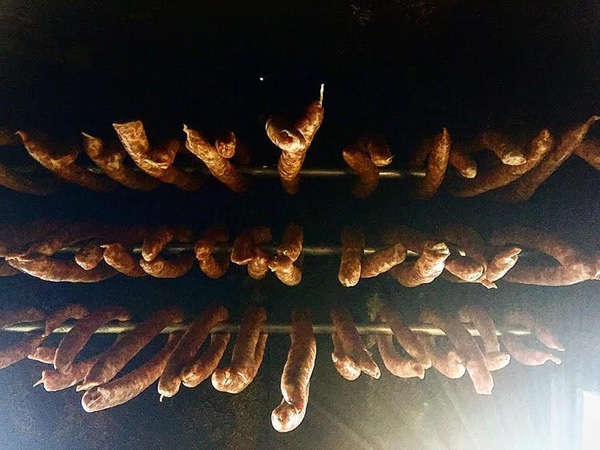 Timing Boucheries typically are held in the cooler months of the year, roughly starting in mid to late October through the New Year. The tradition originated from neighbors gathering before the winter to do a whole hog butchering where the entire community, even children, lent a hand in the process, be it butchering, cooking, preserving, etc. Boucheries were a way for the community to prepare for the oncoming winter by preserving meat to be eaten throughout the season when food was scarce.
Mostly, boucheries are held in the outskirts of the city limits in small towns where everyone comes together to help with the process. Boucheries bring friends and family together to prepare delicacies that complement any Thanksgiving feast, ranging from main course pork roasts to boudin stuffing to even a bacon-laced apple pie for dessert.

Preparation and Details Usually, a boucherie starts off with a prayer to bless the pig before it’s killed. The killing is done by a single bullet to the head to shock the pig. Once the pig is shot, the throat is slit and the blood is drained into a large mixing bowl and whisked with salt so it doesn’t coagulate. The blood is then kept cold to be used later in the boudin noir or blood boudin. Some people use it in backbone stew as well.
Once the pig has been drained, it is moved to the slaughter table where the butcher starts breaking it down. As the butcher is done with a certain portion of meat, he’ll call out “ribs, loin, boudin” and a team member will grab the meat and take it back to their station.

Stations are set up depending on what’s being cooked – usually gratons (cracklin), boudin, frasseurs (organ soup), backbone stew, BBQ ribs and loin, smokehouse for sausage and boudin, boudin noir (blood boudin), ham and hogs head cheese. Of course, different things are prepared in various ways depending on where the boucherie is held, but these are the most common. The food is consumed as it’s cooked, some buffet-style where you walk up and grab a link of boudin or bite of cracklin. At the end, when everything is ready, there is usually a family-style meal where everyone comes together to enjoy the fruits of their labor.
Location Most boucheries take place outside of the city limits in keeping with the tradition of community. Eunice, St. Martinville and Scott are areas where, throughout the winter, there are numerous boucheries, both private and public.
A Revitalized Tradition Five years ago, this was a dying tradition, but not so much anymore. The purpose of the boucherie has changed — not so much necessity but more celebration. While it’s hard to maintain and stay true to the traditions of our ancestors, this is as true to tradition as something